When it comes to food and drink, I tend to skip over bare necessities and indulge my creativity.  My favorite culinary adventures lie in a very frivolous category – cocktails. As I told a friend recently, I am not an alcoholic, but I am addicted to mixology. Ogling cocktail recipes ranks high on my top ten uses for the internet.  Fortunately for my liver, I spend much more energy into dreaming up cocktails than consuming them.

Last summer, I stumbled upon alcohol infusions. I wanted to recreate a mysterious tea-infused elixir that I had tasted at the Experimental Cocktail Club in London – an elixir that forever changed my expectations for alcohol. I am obsessed with earl grey lavender tea, and decided it could create a really unique, herbal infused-vodka. I imagined an adult homage to one of my childhood favorites, Alice in Wonderland, with a handwritten “Drink Me” label.

Unfortunately, the earl grey lavender vodka infusion turned out horribly. Maybe “horribly” is a tad too strong. At first, it resulted in a lesson about the relative ease of infusing simple syrup, but in the long run, I did not give up on alcoholic infusion. However, my first failure in infusions that paved the way for my four successes this past winter.

When I initially began this project, I was expecting to complete each infusion within a week, but ended up infusing all of these a bit longer, from 2 weeks to a month. Most online guides suggested shaking the infusions each day, so I did this most days, but I cannot honestly tell you whether or not it was necessary. I believe all of them were already delicious within a week, but I also think all of them only benefited from extra time, detailed for each case below. My favorite thing about infusions is how much of an experimental, trial-and-error process it is.  Taste-testing the vodka is the best way to measure whether or not to continue infusing, or add a bit of sugar or fresh ingredients.

And look out for my cocktail recipes that may feature some of these infusions in the future!

I quartered a 1,750 ml handle of vodka to create each infusion, but be forewarned, some vodka is absorbed in the processes, as evidenced by the difference in amounts in the top photo. I used larger mason jars (up to a half-gallon, which was way too large) for the raspberry, lemon, and pear infusions, because of the larger volume of these ingredients. I only required a pint-sized mason jar for the coffee, and filtered the other infusions into pint-sized mason jars for secondary infusions.

For the Lemon-Rosemary Vodka Infusion

This infusion was one of the quickest, second only to coffee, and seemingly quite foolproof. When combining the vodka, all of the lemons, and 3-4 sprigs of rosemary. Herbal infusions can easily become bitter, so I did make sure to taste the vodka each subsequent day. I found that after the 4th day I was satisfied with the taste of rosemary and took it out to prevent it becoming bitter.

After 2 weeks I was  satisfied with the lemon flavor and drained it.  First I pouring the vodka through a sifter into a pitcher. Then I  squeezed the vodka through coffee filters into the pint-sized mason jar to filter miniscule sediment.
I personally felt that while the lemon taste eradicated the vodka, it had also overshadowed the subtlety of the rosemary. Once I removed the lemons, I added 4 sprigs of fresh rosemary again, and took them out after 4 days.

For the Raspberry Vodka Infusion

When I was satisfied with the taste, I drained and strained the vodka in the same manner as described in the lemon-rosemary recipe above.

For the Coffee Vodka Infusion

Crack the coffee beans a bit by putting a few in one spoon and applying a bit of pressure from another spoon on top of the beans. Be careful because too much pressure will result in bean-bullets. Place in mason jar with the sugar and pour the vodka on top. While the vodka infused, I added some beans and sugar as I felt necessary to up the flavoring. Drain and strain as described above.

For the Pear Infusion

This one started out with just sliced up pears. I believe I made a mistake by failing to skin the pears. I was so frustrated with what I believe was too much pear skin clouding up and introducing ickiness to the vodka that I decided to filter the vodka early and add fresh, peeled, and sliced pears. I’d suggest doing this from the get-go but feel free to experiment if you try this one out! As I taste-tested, I decided to sweeten it up, but again, this is all a matter of opinion. I infused this one for about 3 weeks. 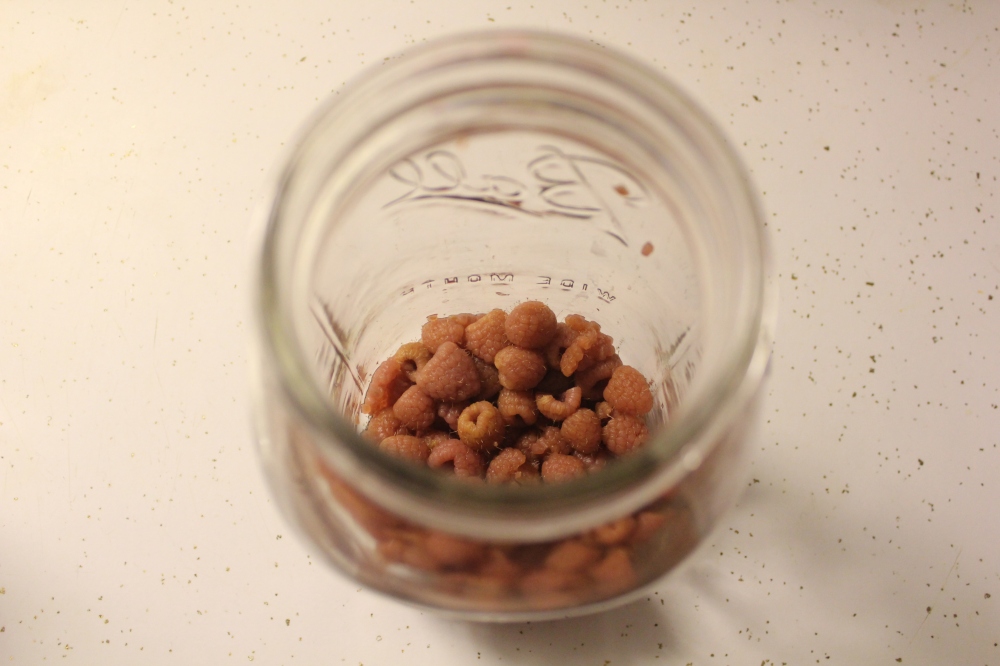 “And when you gaze long into an abyss the abyss also gazes into you.”
– Friedrich Nietzsche, Beyond Good and Evil, Aphorism 146 (1886)