Let me give myself up entirely to the sweetness of conversing with my soul, since that is only thing men cannot take away from me.

-Jean-Jacques Rousseau, from The Reveries of the Solitary Walker

While particularly sorrowful, the above quote encapsulates a quintessential theme of Rousseau’s political philosophy – contrasting the enduring value of authenticity with the suffering inflicted by others’ judgments in an interdependent society. In his works such as Emile and Reveries, Rousseau treasures the self-sufficiency, solitude, and natural pleasure found in a pastoral life in the countryside. Rousseau criticized urban society partly for the threat that social interdependency posed to authenticity. In 1762, the Parliament of Paris’s condemnation of Emile illustrated this philosophy. With a French warrant out for his arrest primarily for expressing his genuine sentiments regarding religion, Rousseau spent years fleeing. Fifteen years later, Rousseau referenced this life-changing event in the opening of Reveries, a personal project he claimed he only wrote to more easily recall and relive the sensations and thoughts he experienced on his nature walks while he ages.

Studying abroad in Paris in the spring of 2011, I only really experienced urban society rather than the pastoral, independent life that Rousseau valued. However, my favorite memories were my moments of reflection in quiet parks and gardens, to which I’d always bring my journal and camera. While photographing, I people-watched more than I felt watched myself. In my fellow garden-revelers, I saw myself. I wondered about their own lives, but seeing them also caused me reflect on my past, present, and future, my family, and my friends.

I think Rousseau would criticize my camera and me as part of the problem. Because most of these photos capture others seemingly unaware of my camera, I find the final picture particularly striking. Whenever I look at it I feel bashful, as the child’s wary look directly into my lens always reminds me that I, like Rousseau’s critics, have disrupted her pursuit of solitary revery. I wish I could tell her, “Je suis désolée.”

Click on a photo to launch a full screen slideshow. 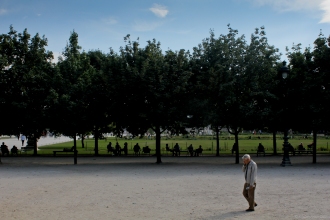 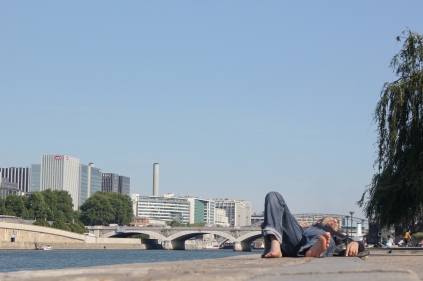 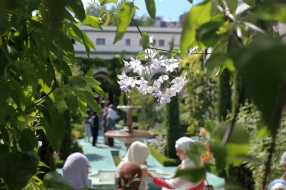