When Flaming Lips frontman, Wayne Coyne, participated in a Reddit AMA last Wednesday, he announced that his band will collaborate with Ke$ha again (see “2012 (You Must be Upgraded)” from the Flaming Lips’ Heady Fwends and “Past Lives” from Ke$ha’s Warrior)  for an entire album entitled, “Lip$ha.” When asked what it was like to work with the pop songstress, Coyne responded, “She is a blast on all levels. She’s funny, she’s humble. She’s badass. She’s everything. She’s awesome.”

Wayne Coyne – if I ever doubted it before – which I indeed did after finally watching Christmas on Mars after years of anticipation with my older brother (not that the film wasn’t good, you know, it’s just not the funky but still family-friendly fun I foolishly hoped for) – you and I are kindred spirits.  I complete agree. She’s funny. Humble. Badass. EVERYTHING. (If you, dear reader, don’t agree, don’t worry, I’ll try to persuade you below.)

To me, it’s been a long time coming for the Flaming Lips, purveyors of the weird, to enter into an epic pop partnership. When the Flaming Lips released At War with the Mystics, the band commented on each of the tracks on the website. Regarding, “It Overtakes Me,” Wayne had imagined that he was writing for my long-time musical idol, Gwen Stefani. Perfection. I had pretended to be Gwen Stefani when I was 6 (by sticking a little plastic gem on my forehead) and Wayne Coyne pretended to be her songwriter about 10 years later. Like Gwen Stefani’s poppiest efforts, “It Overtakes Me” is catchy, sensual, and just plain fun, but its very characteristically Flaming Lips ending is what really hooks me. While the title is repeated as a good majority of the song’s lyrics, the “It”  is never directly named. In my experience, the pop-flavored groove tricks the listener into assuming the “it” is  love, sex, drugs, or music itself. Yet after the beats stop dropping, and the song shifts into a second movement,   “The Stars Are So Big, I Am So Small . . . Do I Stand a Chance?” the “it” seems to relate to the words of the obfuscated back-up vocals (“You’ll disappear in a black hole…Floating out of control”). With this evolution, Wayne and the music become meditative, quiet and pleading, and his words elaborate that this “it’ is the existential mystery of the individual’s place in the immense universe. 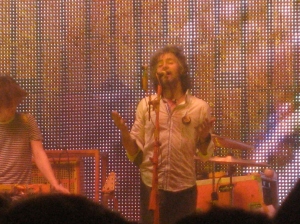 The Lips may not be working with Gwen Stefani, but maybe, as I explored in “Fated to Pretend,” Wayne Coyne’s pretending prepared himself, and Ke$ha, a fan of his music, to bring his musical dreams into reality.  Both the Flaming Lips and Ke$ha are renowned for experimentation, or play, which invigorates the listener and distinguishes them from similar acts.

In many ways, Ke$ha and her music represent the  carefree/introspective duality of “It Overtakes Me / The Stars Are So Big … I Am So Small … Do I Stand A Chance?” In their coverage of Wayne’s AMA, Spin, Pitchfork and others cited “2012” as precedent for a Ke$ha/Flaming Lips collaboration, but Wayne Coyne also worked directly with Ke$ha throughout the process of creating her 2012 album, “Warrior.” In “Past Lives,” the deluxe track partly produced by the Flaming Lips,  Ke$ha describes repetitively “falling for” the same being through the eternal cycle of time, using mystical and science fiction motifs similarly favored by the Lips, as she sings “See, millenniums ago, love/We were nothing more than stardust/Just the galaxy beneath us/You found me.” The Flaming Lips-assisted production of the song complements Ke$ha’s  meditative lyrics perfectly, ending the deluxe version of the album with a sentimental, introspective exploration of the nature of time, love, or even, plausibly, God (“I lost you in the crusades/I built the pyramids for you, babe/Just to see your face”).

With “Warrior,” Ke$ha experiments extensively with genres, directly declaring that she desired to fight against the widespread belief that “rock and roll is dead,” as she told MTV News in January 2012. She lifted a previous restriction she had put limiting the use of guitars in favor of emulating 1970s and ’80s rock, which can be heard in “Thinking of You,” “Wonderland, “Gold Trans Am” (a Deluxe bonus track), and her with Iggy Pop, “Dirty Love.” The result may not sound “experimental” in the psychedelic Flaming Lips sense, but it is undoubtedly a unique and successful experiment of bringing a rock and roll sound back into pop. Throughout this experiment, however, Ke$ha’s essence as a sassy, glitter-coated dance-machine remains constant. Because of her “everythingness,” which fundamentally stems from a willingness to evolve,  Ke$ha proves herself to be a proper suitor for the mighty marriage between experimental rock and pop.

I hope my analysis of Ke$ha has gotten you either intrigued or frustrated, because I’ve been working on a extensive comparison of Ke$ha and Friedrich Nietzsche, who I think would be her most appropriate philosophical spirit guide. I hope I’ll be ready to share more next week. In the meantime, I hope you explore the weird, the playful, and the existential with the Flaming Lips and Ke$ha!

All photos are my own from the Flaming Lips performance at Cornell University, 2010